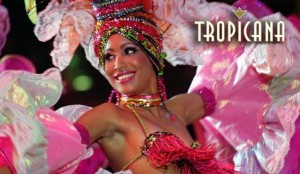 Cabaret Tropicana was built in 1939 in the Havana neighborhood of Marianao. Once considered a risk taken by an entrepreneur who decided to open a restaurant with night club entertainment with a capacity for at least 300 visitors. At the time many considered his idea unfeasible yet today Cabaret Tropicana is one of Havana’s most popular tourism venues.

Tropicana Cabaret is located in a vibrant forest with large majestic trees, such as Royal Palms, Mamoncillos, Mango trees, Cedar and many others, giving the theater its cool tropical feeling. Nat King Cole, Josephine Baker, Libertad Lamarque, Cheo Feliciano, Rita Montaner, Elena Burke and Bola de Nieve and many other celebrities were amongst the many stars who have appeared on Tropicana’s illustrious stage. Performances are conducted right under the stars of Havana’s night sky.

In 1992, the American Academy of Restaurant Industry bestowed Tropicana with an honorable award as the “Best of the Five Stars Diamond” for being the best cabaret in the Americas, recognized for its quality and appreciated for its rich history of over more than half a century.

It is a fusion of Indo-American, Hispanic and African culture that led to a Cuban culture.

The Buena Vista Social Club became an international sensation, performing overseas for the first time in 1998 in Amsterdam. This was followed by a second concert in New York City’s hallowed Carnegie Hall. The German filmmaker Wim Wenders had his cameras rolling during the concerts and the documentary became a smash success; it was subsequently nominated for an Academy Award.

Leading stars including Company Segundo, Rubén González and Ibrahim Ferrer performed until their curtain fell for the last time, in 2003 for Segundo and for González and 2005 for Ferrer, at the ripe old age of ninety-five, eighty-four, and seventy-eight respectively.